Licensed gaming tie-ins with existing media have been met with groans ever since the infamous ET drove Atari to the wall. But in this most surprising of places, I’ve found that perhaps this class of games have been unfairly derided. I was expecting very little from Agatha Christie – The ABC Murders, having no familiarity with the source book or characters popularised in the Poirot TV series. However, this game shows the potential that comes from richly detailed characters and an already well-plotted story to draw upon, while also showcasing some of the pitfalls which can come with adapting an existing work to the game format.

The ABC Murders is clearly a game built on a budget. The cell-shaded graphics style and Unity engine are functional, but won’t be winning any awards. For a point and click adventure game, the puzzles are simple and there were even a couple of occasions where the solution wasn’t accepted until I used a hint, which completed the puzzle in effectively the same way I had tried. But I’m happy to forgive all that for a worthwhile story, and The ABC Murders delivers well on that front with a ripping detective yarn. How? Through the magic of adapting an already good story! 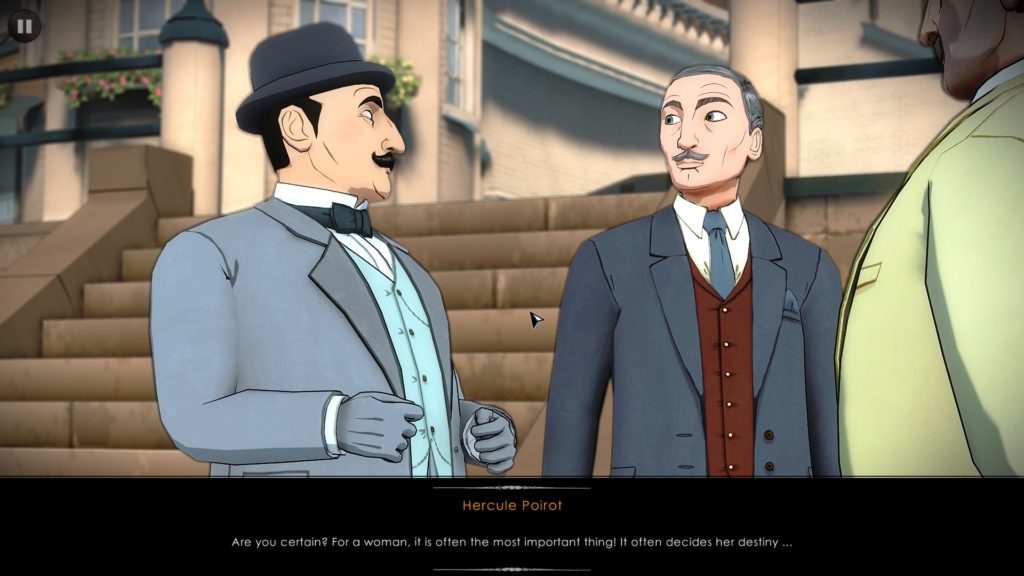 The use of a pre-existing story means that characters are easily fleshed out and indeed, I noted that the incidental side characters to the first murder scene were more three dimensional than anyone featured in Ace Combat’s cast. Detective Hercule Satan Poirot makes a great protagonist, mixing an obsessive eye for detail with wit and ego. A parade of side characters are effectively realised through some decent voice acting and Poirot’s observations to offer useful information as witnesses and potential suspects. The game even manages to pull off a bait and switch, with an apparent antagonist framed and the real villain hiding in amongst the side characters. None of this is particularly notable in the literary world from whence The ABC Murders draws its inspiration, but video games manage to get characterisation and storytelling wrong so often that this game made in Unity on a shoestring budget puts many AAA titles to shame.

The success of The ABC Murders storytelling is partly down to its linear point and click adventure stylings. It is clearly much easier to tell a good story in a genre where storytelling is the main focus. But adapting an existing book also played a substantial role, with well defined characters and the story’s direction clear from the start. Thus, rather than the writing taking place in parallel with game development, the game could be made to fit the story, rather than visa versa. In typical large productions, if a story beat doesn’t work out then entire levels worth of assets need to be remade so the story is jerry-rigged to suit the content. Of course, a story doesn’t need to be licensed in order for this order to be flipped, but generally this story-first approach is an anathema to the gaming development cycle. And of course, in adapting a story which is worth publishing in literary format, the developers start with a much higher base level of writing than that typically achieved in the gaming format. So adapting an existing source material can work effectively, particularly for games with smaller budgets and more of a story focus. 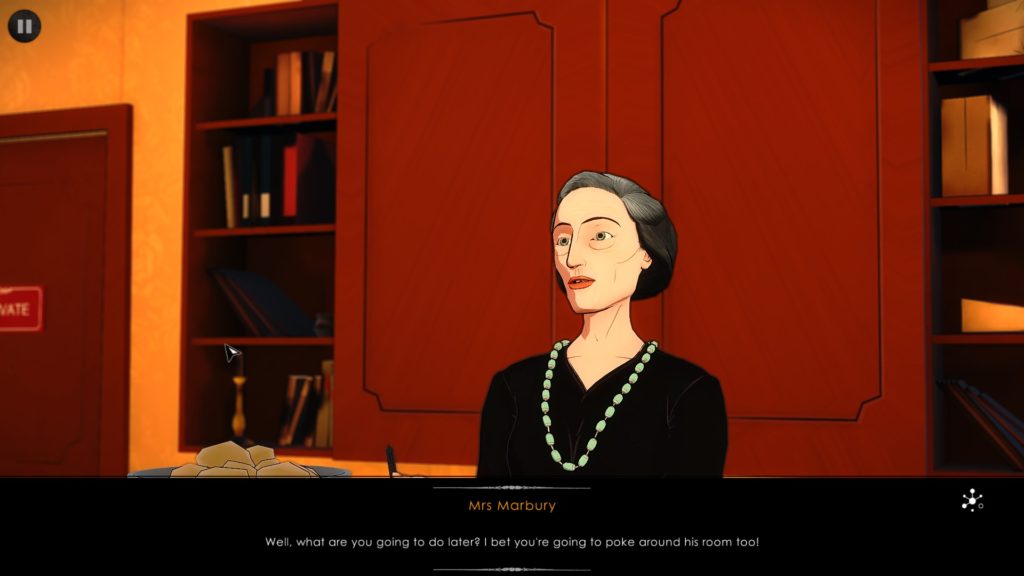 However, The ABC Murders also shows us some of the pitfalls that can come with licensed works. The game has an odd relationship with the protagonist – it felt more like I was guiding Poirot to the plot points rather than actually being Poirot. Because the story wasn’t originally built around the staple puzzles of the adventure game format, these felt out of place and generally weren’t very challenging, so it felt more like an interactive story than a typical adventure game. Indeed, the whole thing felt a little more like watching a TV show featuring Poirot rather than playing a game. The intense railroading which comes with an adapted story can really hurt the mystery aspect of the game, though the twist in this one’s tail averted that somewhat. So The ABC Murders is a capable story in an interactive package, rather than the typical exciting game pulled together by the shreds of a story.

The ABC Murders shows the potential for licensed works which do genuinely work as games. So why don’t we see many of them? I posit several reasons.

First of all, many licensed games are intended as cash cows. A game which ties in with the release of a major Hollywood movie doesn’t need to be good, it just needs to be released at the right time and marketed appropriately. This means they are done on a budget and in a scenario where a strict deadline will always win out over quality. Make em’ cheap and get em’ out the door. Not the ideal scenario for excellent art.

Secondly and following on from the first point, licensed games have a bad reputation because so many are cash cows. Being licensed from another format brings sighs of resignation from the gaming audience, who have been burnt time and time again by shoddy movie tie-ins. The built-in audience of the existing work are a positive, but you’ll start from behind in the eyes of the general gaming public. This means the budget is often correspondingly smaller, to target the die hard fans of the original work rather than make a game for the wider audience.

Thirdly, mainstream games are still primarily driven by mechanics rather than storytelling. If you’ve got a great idea for a game mechanic like physics puzzles, portals or a glue gun, its going to be hard to find a quality work to adapt that suits the limitations of the format. Much easier to develop a story of your own based around your cool new mechanic.

Finally and perhaps most importantly, games developers, like most of us, want to create stories of their own. A licensed game will have an inevitable asterisk next to the story by virtue of its earlier creator. If you get it right, all the credit will come to the original work (much like the Game of Thrones TV show). But if you get it wrong, fans of the original work will hate you for it (like the 2016 Ghostbusters movie). Developing your own story means you get to see your own stories unfold in-game, which is what most game designers have dreamed of. Consider an aspiring game designer first given the reigns of a AAA title and told to tell a story; nobody wants to throw away that chance and make an adaptation of somebody else’s tale.

So these factors conspire against licensed games, meaning that only those searching for cash cows or who are both in search of a story to tell and humble enough to share the glory dive into this particular area. But when done well, the result can punch far above its weight category, like the surprising Agatha Christie – The ABC Murders. I’d suggest that even non-licensed games can learn from its story-first approach.

Next up in this nascent series is Amnesia: The Dark Descent.