Dig Dug, released on Steam as part of Bandai-Namco’s Arcade Game Series is a port of a game which turns 35 this year. Which does make it odd, writing about a game which is older than I am. Yet for all that 1982 feels like ancient history, within 5 years of Dig Dug we had Super Mario Bros, The Legend of Zelda, Castlevania and Dragon Quest. So Dug has tunnelled us a nice time capsule to the end of the arcade era. But with so much progress in game design since that time, is there anything worth learning from Dug’s digs?

Dig Dug has no pretensions of a story, lore or a wider narrative. This is a game which is strictly formulated for the mechanics, with the lure of a high score to keep you coming back. In fact, of modern game styles, Dig Dug feels most like a stealth game. The game’s titular player character can dig through the dirt environment and shoot two different types of enemies with his inflater. The enemies can not dig through the dirt, but instead can turn into ghosts, freely moving through the dirt until they reach an open section. As such, they are initially trapped within their own areas, and part of the game is figuring out how best to approach and defeat them. This is particularly important because one type can breathe fire, which is able to pass through narrow walls and kill Dig Dug at a distance, as well as the typical death by contact with an enemy. The player has an environmental weapon in the form of rocks which will fall if dug underneath, potentially killing enemies (or the player if they aren’t careful). If the player drops two rocks on a level, a vegetable appears which can be picked up for bonus points. So there’s actually a fair bit going on in Dig Dug, by the standards of the time. 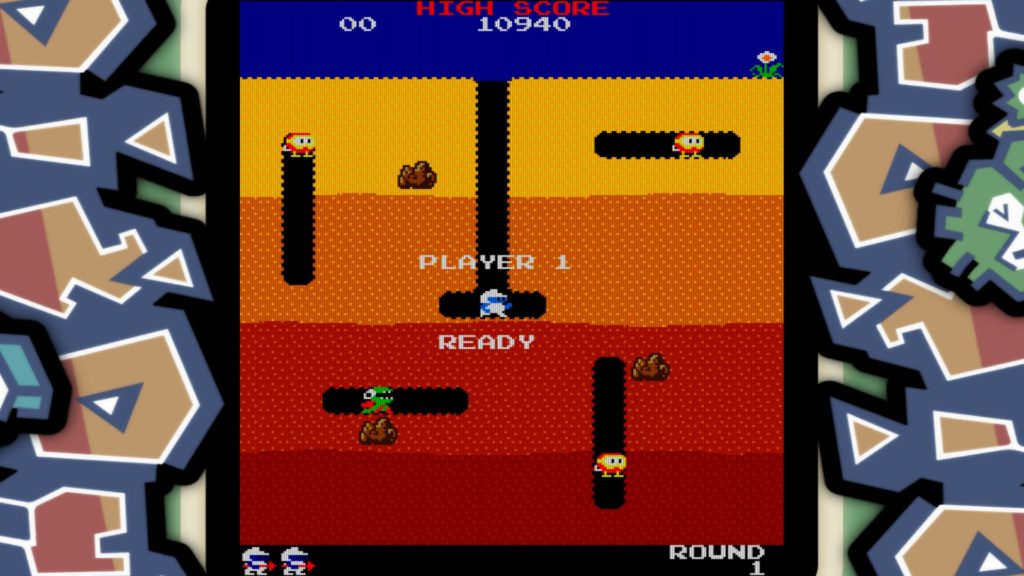 However, by today’s standards a game for which everything can be condensed into a single paragraph is incredibly simple. And yet, I did have some fun chasing high scores, trying to master the systems which Dig Dug put in place. There is a kind of kinetic, repetitive fun in replaying a simple game like this over and over, trying to get better and progress further. And of course in Dig Dug with no player experience points to grind, there is a direct, pure connection between player skill and performance. Many modern games provide so much extra equipment, perks and bonuses simply for playing the game that a player will perform much better after sinking in time, regardless of whether they have actually got any more skillful. So there is a purity to Dig Dug that I really appreciate, much like an arena shooter. But unlike an arena shooter, Dig Dug suffers from some serious control issues which are an artefact of its time. Although movement appears free at first glance, the player is actually only able to follow gridlines. A picture is worth a thousand words here. 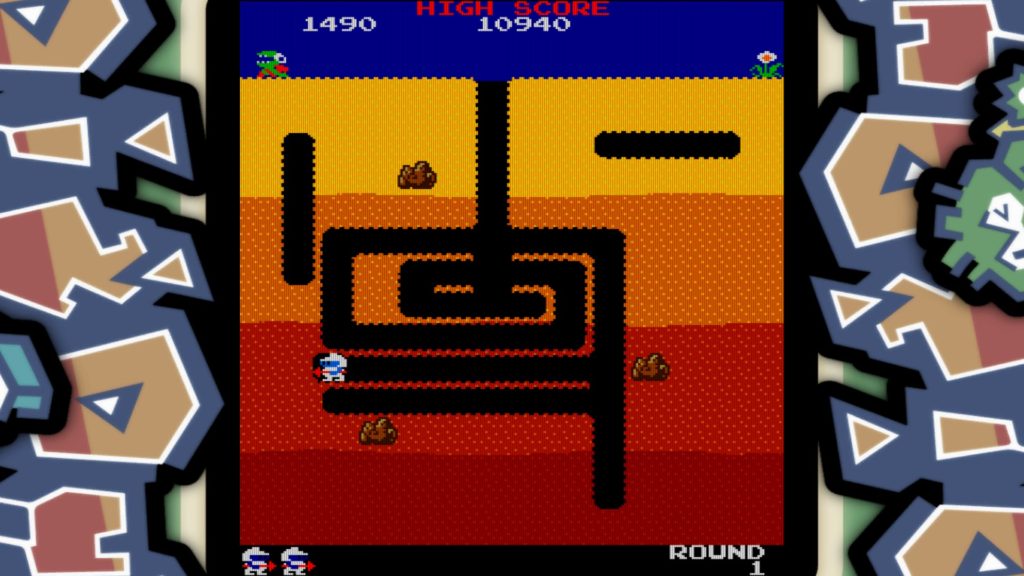 So when I pressed up or down, the game would take me left or right until I reached the next vertical gridline. On quite a few occasions this meant that instead of fleeing from a monster, I ran straight into him. Not ideal in a game where lives are precious. This would have been required to keep memory usage down to the levels available in the arcade machines of the time, but in 2017 this really threatened to ruin the game for me. When I press a direction, I want to be able to shoot the bad guy charging me from there, dammit!

So I’ve learned two things from Dig Dug. On one hand a purely mechanical skill test can actually still be pretty fun, even without anything else to go with it. But I’ve also learned that bad controls will totally break a game.

I’m running through Namco’s Arcade Game Series at the moment, so next up is Galaga.