Its kind of a barren wasteland, but there are some opportunities for those with a camera.

END_OF_DOCUMENT_TOKEN_TO_BE_REPLACED

Some shots from my time in Adelaide recently.

END_OF_DOCUMENT_TOKEN_TO_BE_REPLACED

The ABS released the results of Australia’s survey into the legalisation of gay marriage today. The headline result was a win for the ‘Yes’ vote, with 61.6% of the vote which should translate into legislation in the near future. Thanks to the release of data per electorate, we can also use this to take a look at what sorts of communities were more supportive of the change. As a pure issue of social liberalism versus conservatism, this gives us the opportunity to consider positions of groups of people solely on an axis of social issues, rather than conflating them with economic issues as is the case in general elections. As the data is only detailed down to a per electorate basis however, we do need to consider that across an electrorate there may be substantial variation as well as a cacophony of variables acting in multiple ways, so these are certainly guides rather than anything genuinely scientific.

END_OF_DOCUMENT_TOKEN_TO_BE_REPLACED

Some plants and animals from the National Botanic Gardens.

END_OF_DOCUMENT_TOKEN_TO_BE_REPLACED

The self-help book is ubiquitous, filling the shelves of bookstores and offering to solve the problems of your life. From happiness to loneliness to overeating, everything can be solved with a ten step plan. In the digital age, a cottage industry of self-help websites have sprung up, with similar promises and even less scientific backing. Self-help books are the world’s best selling genre. They demonstrate both our dissatisfaction with our lives and the all pervasive nature of the ideology which underpins them.

END_OF_DOCUMENT_TOKEN_TO_BE_REPLACED

To further my earlier post on STEM oversupply, I took a look at historical graduate numbers and job openings (on a three year rolling average to smooth out fluctuations), using data from the ABS and the Department of Education & Training, accounting for not just retirement but also deaths and migration (though occupation data on skilled migrants isn’t available). In short – even under the old restricted entry system, graduates often outpaced opportunities but the combination of economic slowdown and increased access to education after the GFC has led to this gap widening to its present unsustainable level.

END_OF_DOCUMENT_TOKEN_TO_BE_REPLACED 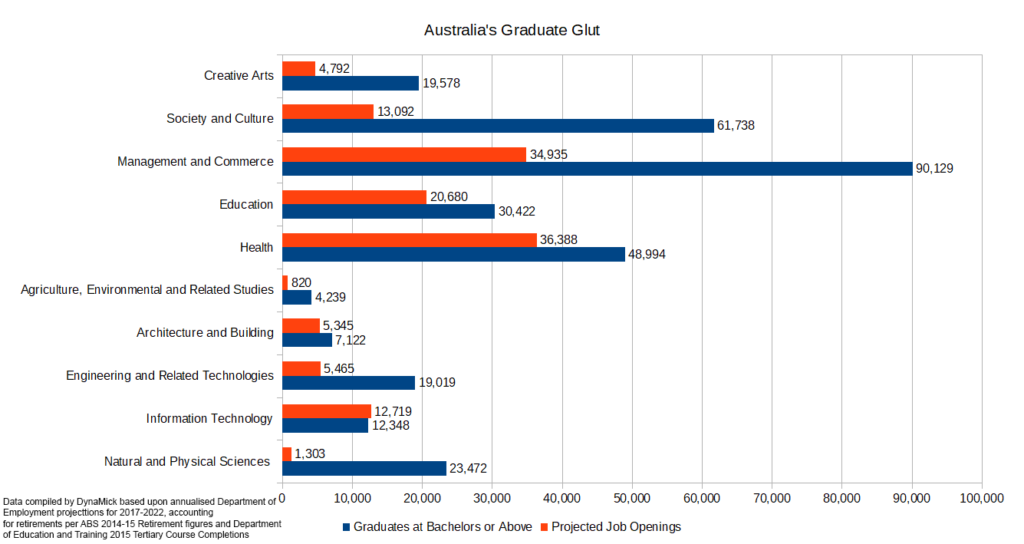 Deregulation of university places by the Gillard government has left a legacy of massive graduate oversupply. The chart above makes for stark reading, with many more graduates than jobs available for them in every field except IT, much like the situation in the US. The much vaunted STEM field, which Australia’s Chief Scientist declared should be “at the core of almost every agenda” is revealed to be a hollow wasteland, with 18 graduates for every job in the maths and sciences. The supposedly “always in demand” engineering sector provides a similar employment proposition to the much derided creative arts stream. Without jobs in their area of study, graduates in SEM will be forced outside it in order to find work, if indeed they can find skilled work at all given the depths of the oversupply. So how did we get here, and why is STEM still lionised as a cure-all to employability?

END_OF_DOCUMENT_TOKEN_TO_BE_REPLACED

Some flowers and little creatures from Jerrabomberra Hill.