They don’t make ’em like they used to. Like its Arcade Game Series sibling Dig Dug, Galaga is designed for arcade gaming sessions with no continuing story or narrative. You are a spaceship that shoots aliens. Simple. So in order to keep the player coming back and dropping their quarters in the arcade machine, it needed a hook. Galaga is an arcade shooter which is geared from the ground up around raising the skill ceiling, making expertise and skill matter as much as possible. I’d even say that Galaga is the anti-Farmville. I mentioned in my Dig Dug article the simple joy of mastering mechanics and chasing higher scores, but Galaga manages to distil this down into its purest form.

Aliens come into the game screen from either side or the top of the screen, but in patterns which are identical for a particular level on every playthrough. So these can be learned by a good player. The aliens then move together in repetitive patterns, which again are the same every playthrough. Once all the aliens in a particular level come in, they will split off and attack the player, with each ship moving in a particular manner. All these patterns can be learned.

Critically, there can only be two bullets on the screen at one time. This means that a player who can hit a target half way up the screen will get to fire again, while a missed shot is still travelling to the top. So a good accurate shooter gets to fire at a faster rate than one who sprays and prays. There are regular ‘challenging levels’, where the aliens come in particular patterns without settling on the screen and the player must shoot them mid-move for bonus points. But again, these patterns are the same for that particular ‘challenging level’ every time the game is played, so a good player learns how to combat them and earn the big bonuses which accrue. These are all areas where more time and skill with the game will yield better outcomes, but ones which are earned, not given. 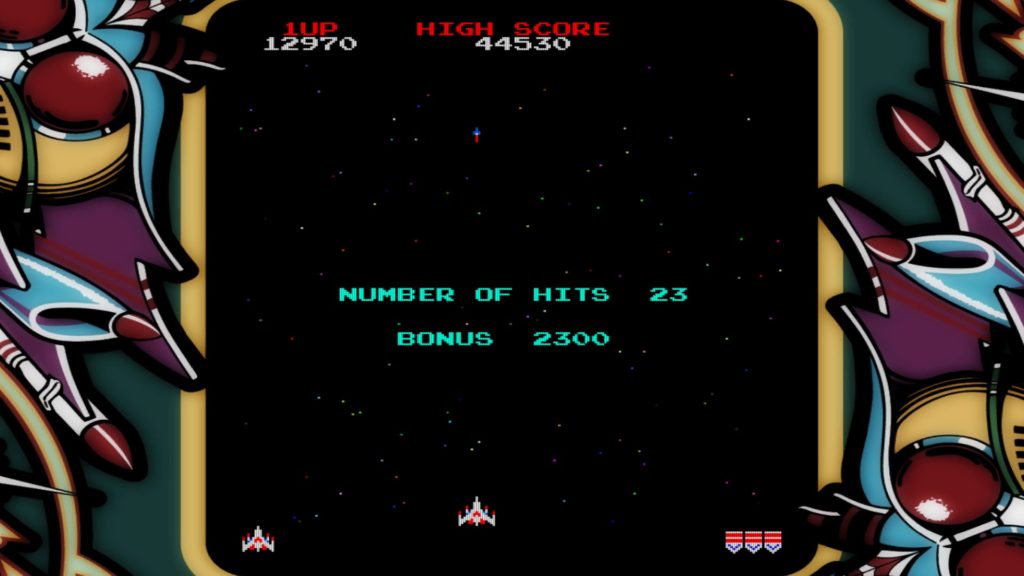 This philosophy of so strongly rewarding skill gained rather than simply time spent runs contrary to modern AAA and mobile game design. In Galaga, a player who has spent years playing the game starts on an even footing with a kid starting his first game. There are no killstreaks, no perks and certainly no jewelled unlocks. A player gets a faster fire rate by predicting alien paths and shooting accurately, not because they unlocked gold bullets.

Certainly the modern style has the benefit of letting players of all skill levels feel like they have achieved something with their time in game. It also means that more folks can experience the narrative which is often a central part of the modern experience. But I wonder whether there is still space for a game about mastery, about just learning a game until you know it inside out. I suppose this does exist in a form, with MOBAs, Starcraft and the e-Sports scene, but this is rather different to the classic simplicity here. In fact, speedrunning may be the best answer to a modern Galaga.